The Saley Sam Wangchuk Gyem was born into the family line of the Great Terchen Dorje Lingpa. She was the daughter of Terchen Dorje Lingpa’s son Trulku Chokdon Gonpo. She was born in Sha Tsilo. Because of this great lineage of Terchen Dorje Lingpa all daughters born in the family are titled Sam and sons as Lam.  This practice was going on for many years.
Saley Sam Wangchuk Gyem was a Khandro (Dakini), a great Bodhisattva and a Terton (Treasure reveler) herself. She could exhibit numerous miracles, can take out many Guru Rinpoche’s Ters (sacred holy artifacts) and even generate Drupchu (holy water). Such was her greatness. Some of her Ters like Saley Sam‘s Thro,  Saley Sam’s Baking Chayo (plate) along with Terchen Dorje Lingpa’s Namcha Omi Reldri were preserved in the monastery (Recently I had access to all the Ters and received immense blessing).
Saley Sam from the place called Ter Nob retrieved all these Ters. It is believed that blacksmith oven of Guru Rinpoche’s Karsung Damchen Dorje Lekpa’s is also located somewhere in that area. Damchen Dorje Lekpa is the main   blacksmith who had produced all artifacts of Guru Rinpoche. Those sacred artifacts are the main Nagten at the Gyemphaka Lhakhang. Amongst the many Ters, the highly sacred Guru Rinpoche’s ter Namcha Omi Reldri, is the longest Ter of its kind amongst many similar Ters . Even Punakha Dzong possesses a small one.
Sam Wangchuk Gyem for the welfare of all sentient beings has blessed us a Drupchu known as Saley Sami Sangchu. This is located near Gyemphaka Lhakahang. Children with stammering voice can easily get cured if this Drupchu is given and make them to take bath there.

One miracle Saley Sam exhibited was the technique she baked Khula/ Captang (Chapati). She doesn’t required fire to baked Khulay. She sits down and places the Chayog (Baking plate) on her raised knees and baked hundreds of Khula in no time using Tum Ashey Mey. Tum Ashey Mey is a fire that is generated from the body. This is possible only by high Bodhisattava.  One such example was Sangay Yusung who had used Tum Asay Mey from his thumb to cremate himself after his nirvana.


Saley Sam stayed as the head of house with hundreds of workers working in the vast field. It is said that after she delegate jobs to all workers and when it is time to prepare meal, she tells them that she will go and cook food. The most striking thing was the moment she reaches house she would call everybody for meal. All her workers wondered how she prepares meal without even seeing a bit of smoke coming out from her house. One day one worker secretly followed her to check and found the cooking method as described above. It is said that because of bad omen of that worker the Khulay got struck on the baking plate and thereafter she stopped baking on it.

In olden days many contagious and deadly diseases like Jumney (chicken pox) Poro Machum, Poro Kachum used to struck the villages and many die but non-from family member ever contacted these deadly diseases. It is said that because of the presence of Salay Sam’s Ter Thro, Ter Chayog and Namcha Omi Reldri in the house, the families were all spared from such diseases, as it is being received and pacified by her Ters.
Before the arrival of Zhabdrung Ngawang Namgyal into the country, Salay Lam Wangda (my grand mother Aum Phuentsho Dem’s grand father), a dissident of Salay Sam Wangchuk Gyem was the most powerful lam in that area. As per old thram, Salay Lam’s jurisdiction starts from Salay Poto Namcha to Do Tsirang Chuzhi (Chirang wetland). Yearly the people of these localities have to offer Bulwa to Shalay Lam.
On the arrival of Zhabdrung Ngawang Namgay, Salay Lam welcomed him and later all the land jurisdiction as stated above was offered to Zhabdrung Rinpoche. All prominent sponsors were also handed over to Zhabdrung Rinpoche.  Thereafter, the annual Bulwa that is offered to Shalay Lam was being offered to Zhabdrung Ngawang Namgay.

The following are the two ancestral lhakhang.

Trulku Chokdon Gonpo, the son of Terchen Dorje Lingpa, established the monastery at Saley under Rubisa Geog. It is more than 700 years old. It is two-stored building. The main statue is Cherigzig Chatong Chen tong. On the right side is Guru Rinpoche and the left is Terchen Dorje Lingpa. In another room on the right side is the Goenkha of the Lhakhang that houses Gonpo Mani Puti. 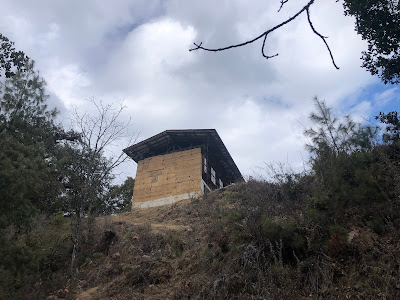 The Gomphakhai Lhakhang is situated on the side of a stream, overlooking the Sheley village. It is also facing Tshokolo Lhakhang. This was the main house of Seley Saam Wangchuk Gyem. During those days it was called Naktsang. I am very happy to mention that my late grand mother Angay Phuentsho Choden was born in that house.

In olden day the family have to contribute heavy tax and face great hardship in labor contribution because of huge land holdings. My uncle Penjor (ex-monk) approached the government to relax the labor contribution, as one person has to look after house because of the existence of many sacred Nagtens. 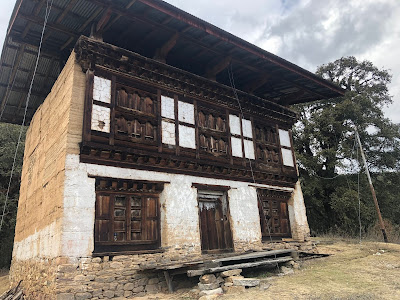 Likewise the Government deputed Thrimpon Ura Gup who on verification was surprised to see many Guru Rinpoche’s sacred Ters in the house and approved the house as Lhakhang. Subsequently, the house came to be known as Gomphakhai Lhakhang.
The main statue is Guru Rinpoche flaked by Amitabha on the right and Cherizing on the left. Little far on the right is the Geonkha of Shaley Gyap.

The following are the religious rituals carried out in the monastery:
At present my cousin brother Au Thinley looks after both the Lhakhang.

As per “ Dorje Lingpa and His Rediscovery of the 'Gold Needle'” in 1370 the Terchen Dorje Lingpa visited Khothang Samten Rinchenling (today Kothangka) in Shar, one of the eight establishments of Longchen Rabjam (1308-1363). Dorje Lingpa describes this place like the opening of a flower.
Dorje Lingpa wrote at least two letters to his people in Bhutan in his later years. One, dated 1381, was sent when he was at Rinpung in Tsang. It is addressed to Kunzanggyal who lived in the “Cypress wood forest of the South”. This person is described as “the little boy” (buchung), possibly one of his own sons. 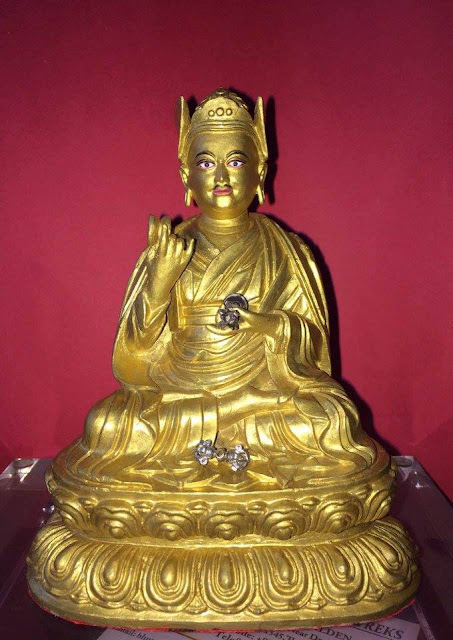 The other letter was written in 1384 at Chuwori. A nun called Togden Sonamgyal paid a visit to him and offered to take the letter as she was leaving for Bhutan. It is addressed to all his disciples and benefactors in Paro, Thimphu, Thed, Sharchog (here it means the Shar disrict), Khothang (in Shar), Phurig  Dangchu (in Shar) and Gönyul in Thed (Punakha). In this letter he mentioned that he intended to come to Bhutan in the summer of the current year, but was worried that too many followers might accompany him and that it would be too hot for them in Bhutan. He indicated that he might stay for two months if he managed to travel during the winter instead and wanted to build a “gate” for the Khothang temple as well as to meet all his disciples visit. At any rate, there are no records of travelling after 1384 in the Collected Works.


I am very grateful to my Uncle Gup Gyeltshen of Ula who took great interest in answering all my questions in spite of his busy schedule to come up with this brief article on our ancestral linage. Uncle Gyeltshen is the father of our great comedian Ulap Leki. I will be soon reading the detail Namthar of Terton Dorje Linpa and will write detail about Salay Sam Wangchu Gyem.
By Phub Dorji Wang at March 26, 2019
Email ThisBlogThis!Share to TwitterShare to FacebookShare to Pinterest
Newer Post Older Post Home