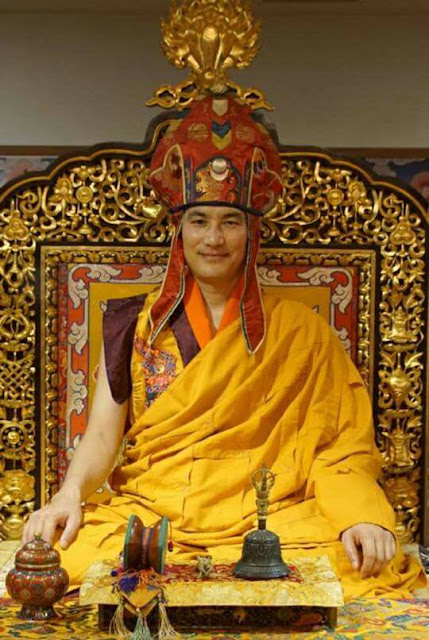 
According to Buddhist history Terchen (treasure revealer) Dorji Lingpa is the East Treasure King of Second Buddha Ugyen Guru Rinpoche and is the third of the five treasure kings (Terton Gyelpo Nga)1.

Busa Trulku Khentrul Sonam Gyeltshen Rinpoche is also known by his religious name Sangay Yeser and more commonly called 'Lam Chung Sonam’ which he has been called since a very young age. 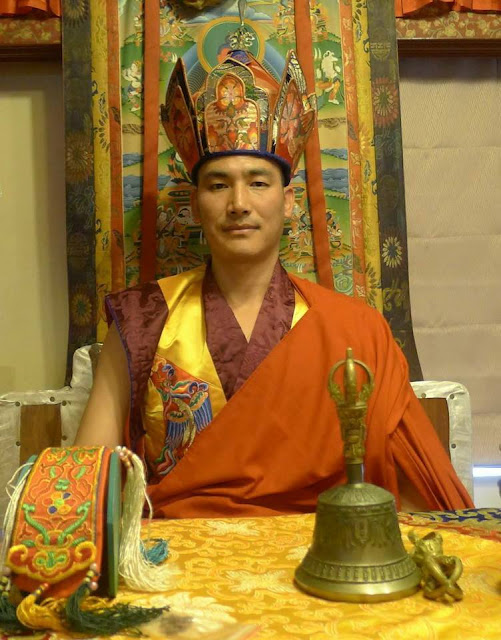 During the eighth (8th) century, the Second Buddha Ugyen Guru Rinpoche travelled through Bhutan, particularly in the current location of Trulku's monastery, subduing evils, burying treasures for future discovery and also left his body prints (feet and hands) in many locations. 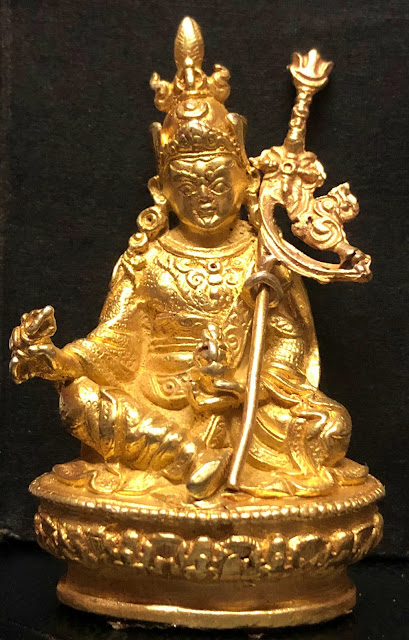 In the fourteenth (14th) century The Terchen Dorji Lingpa discovered the treasure of a Golden Dragger and a scripture titled “Thukji Chenpo Gyelwa Jamtsho” and revealed many other relics from the Tshomo Umteng lake in the high mountains of Bhutan. The Umteng Lake is located two day’s walking north of Trulku’s monastery (called Busa Wangdue Goenpa Dhensa). With these treasures, Dorji Lingpa arrived on the hill where the current monastery is located, meditated and prophesized that in future his Heart Son would establish a monastery at this location.
Subsequently, in the seventeen (17th) century, the Heart Son of Dorji Lingpa, called Thuksay Tshungmed Tashi Tenzin came and laid the foundation of the monastery. The same Golden Dragger revealed by Dorji Lingpa, which was in his possession, was used to consecrate the ground. This was also the start of the Busa Trulku Lineage at Busa Wangdue Goenpa Dhensa.

From the time of his birth Trulku spent his time with Agay (Uncle) Lama Ngawang Tenzin Rinpoche and slept at his Uncle’s residence instead of with his parent even when he was a child. Trulku was able to distinguish the personal belongings from his previous life from when he was very young.
Bhutan’s monastic body affirmed his identity as a Trulku, or reincarnation, as the ninth (9th) successive lineage holder of Tshungmed Tashi Tenzin, the Heart Son of Tertoen Dorji Lingpa.

At the age of seven Trulku started his early education in Buddhist teaching for five years at the Central Monastic Body, with the Sixty-Seventh Je Khenpo (3) Nyizer Tulku Thinley Lhundrub in Tashichodzong, Thimphu. He then joined Nyingmapa studies at Buddhist college (Tholop Shedra) at Gangteng Monastery. He completed his monastic education (Zinda Gupa) with a Master of Arts in Buddhist Philosophy from Gangteng Tholop Shedra under the tutelage of His Eminence 9th Gangteng Trulku Rinpoche Kuenzang Pema Namgyal. During the course of his studies at Gangteng Monastery, he also spent years of studying Buddhist Philosophy, including two years of Buddhist debate in India.
Upon the successful completion of his monastic education, Trulku entered his Lo-Sum-Choe-Sum, three years retreat in 2003. From 2007 – 2009, he worked in the capacity of Lopen (teacher) and Drungchen (secretary) to His Eminence Gangteng Trulku Rinpoche at the Gangteng monastery.

In 2008, coinciding with the nationwide celebration of hundred years of the Bhutan Monarchy, he was honored as the recipient of the title of Khenpo (Professor) during the awarding ceremony of the first batch of Khenpos at the Gangteng Monastery.

To preserve and promote the teachings and the culture of Dorji Linga, a monastic school was established at Busa Wangdue Goenpa Monastery in 2000 with over 30 Monks. It is supported and sustained with the support of the Taiwan Dorji Linga Centre under the leadership of Trulku. The plan to relocate the Shedra as a (Thorim Shedra) Buddhist College to accommodate more monks with full boarding facilities at (Tshang kha Fa Kha) is underway. 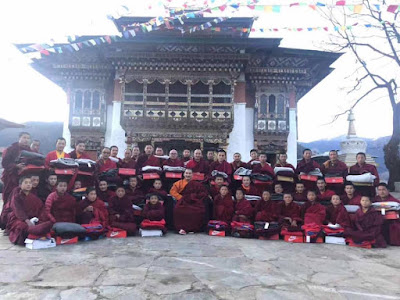 In 2009 Trulku was appointed as the Head of Busa Wangdue Goenpa Dorji Lingpa Dhensa Monastery in 2009. His Eminence the Gangteng Trulku Rinpoche and Agay Lama Ngawang Tenzin Rinpoche presided over the appointment ceremony, which included the people and the community of the areas surrounding the monastery and representatives from Wangdue and Trongsa Dzongkhags (districts).
In 2013 Trulku established the Dorji Lingpa Foundation. The foundation has Busa Wangdue Goenpa dhensa monastery as the pivotal monastery with four other monasteries also under the management and support of the Foundation: Rabutse Lhakhang at Pangkha Goenpa, Tshengay Pokto at Rukubji, Zabjay Lhakhang at Dangchu, Lami Goenpa at Drangla:
Events of handing over of monastery to Trulku Rinpoche

In 2014 the community of Rukubji and Bombelo handed over the Tshengay Pokto monastery (Dudpung zelnen Ling) to Trulku. Since then a monastic primary school was established with three teachers and 23 monks. A two-story dormitory, kitchen, dining area and classrooms have been constructed for the monks and teachers.
In 2015 Rabutshe Gonenpa (Ternye gyephel Ling) another holy site blessed by Vajravarahi and Guru Rinpoche in the eighth (8th) century was offered to Trulku. The site has a statue of Guru Rinpoche, which was believed to have spoken and shed tears. Since the Foundation took over the site the dilapidated monastery has been re-built with the support of the Royal Government of Bhutan and donors from Bhutan and abroad. A monk and a caretaker have been appointed to manage the monastery.

In 2017 the Zhabje Lhakhang "Monastery of Foot Prints" at Dangchu, which is a very sacred legacy of Guru Rinpoche and Dorji Lingpa, was handed over by the people of Dangchu to Trulku. A plan to develop a Dorji Lingpa nunnery at the monastery is now well underway.
On December 28, 2017, the 70th Je Khenpo Trulku Jigme Choedra, the Chief Abbot of the Central Monastic Body of Kingdom of Bhutan, conferred ‘Tashi Lekdhar’ to Trulku at Autsho, Lhuentse, in Eastern Bhutan in recognition of the contributions Trulku has made to spreading Buddhist dharma and Dorji Lingpa teachings and culture to benefit all sentient beings. 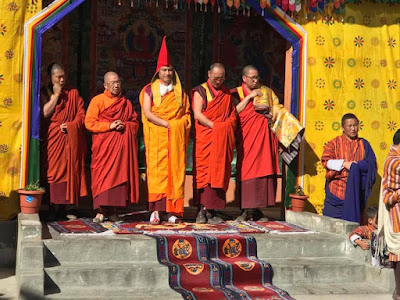 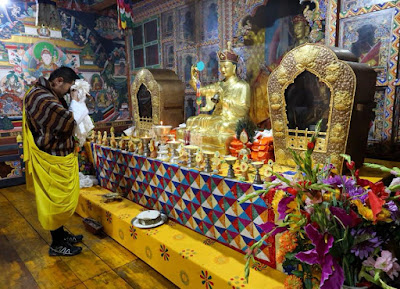 
4. In Bhutanese Buddhism sutras, mantras and teaching are passed from master to student through “oral transmission”. This practice ensures the student is at an appropriate level of comprehension and practice of Buddhism to understand the teachings
By Phub Dorji Wang at March 23, 2019
Email ThisBlogThis!Share to TwitterShare to FacebookShare to Pinterest
Newer Post Older Post Home