Who took the photo of Ngadrama, the famous "Same As Me" statue of Guru Rinpoche? I am sure you all must have seen one way or other this famous Guru Rinpoche’s look a like image.

HRH the Queen Mother of Sikkim, Gyalyum Kunzang Dechen Tsomo Namgyal, was gifted with an Agfa camera and, in 1935, while visiting relatives, used this camera to take a photograph of the famous Guru Ngadrama statue at Samye. Unfortunately the statue was later destroyed during the Cultural Revolution.

Had HRH not taken the photo, today we will be deprived off this real image of Guru Rinpoche.

From 1935 to the early 1950s, nobody gave this photograph much thought. It was treasured, and only one or two prints are made without attaching great significance. 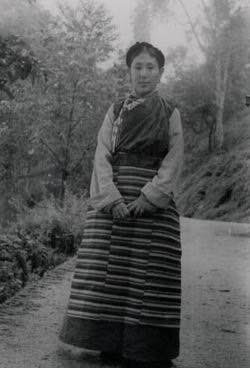 Fortunately, in 1955, when Jamyang Khyentse Chokyi Lodro came to reside at the Palace Monastery in Gangtok, Sikkim, he saw the photograph, instantly showed great reverence and made  copies and distributed to his favorite students.

The original photo was in black and white, it was later computer enhanced according to the advice of lamas who saw the original statue before it was destroyed during cultural revolution by the Chinese.

Origin of the statue

‘Looks Like Me’ (Guru ngadrama),  this is an image of Padmasambhava which was made from life and blessed by him in the eighth century in Tibet. It is believed that on seeing this statue at Samyé, he remarked, “It looks like me,” and then blessed it, saying, “Now it is the same as me!”

So Guru Rinpoche look exactly like the one seen in the image.