Milk from the wall at Nalanda 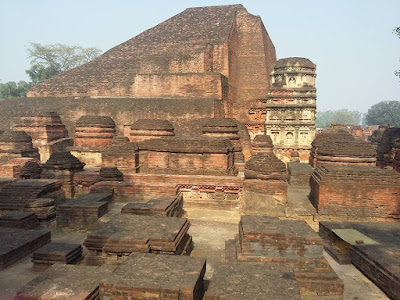 Nalanda University in northern India drew scholars from all over Asia, surviving for hundreds of years before being destroyed by invaders in 1193. Guru RINPOCHE had also studied and came from Nalanda to Bhutan and Tibet to spread Buddhism.
During those days the Buddhist monks can perform many types of miracles.
To give an example, once during an annual puja the head lama asked his junior to bring 20 ltrs of milk for making offering within 5 minutes. It was impossible for the junior to get the milk within such a short time. However, he was so learned monk and can perform any types of miracles. He immediately made a cow's drawing on the wall and started milking from it. He gave the milk to head lama in time. 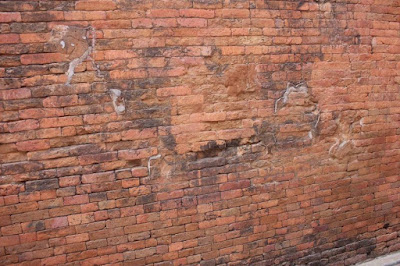 (Cow sketch made by the monk)
༄༅ ། ། དཔལ་ལྡན་ཟླ་བ་གྲགས་པ་ཡིས།། རི་མོ་བྲིས་པའི་བ་རྣམས་ལས། །འོ་མ་འཇོས་པས་གཞན་རྒྱུད་ཀྱི།། བདེན་ཞེན་ཟློག་པ་ངོ་མཚར་ཆེ།། ཞེས་གསུངས་སོ།། །།
The drawing is still seen today on the ruined wall at Nalanda.
I managed to see the faded drawing twice during my visit to Nalanda. I want to ensure that these important facts are not lost over the period. Even many Nalanda tourists guide don't know the story. 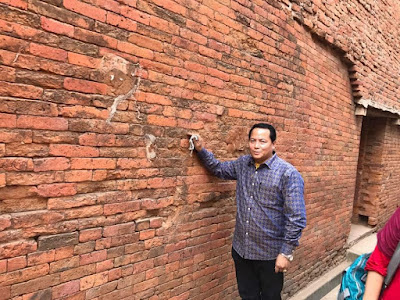 So enjoy it friends and don't forget to see when you visit the Nalanda on the way to Bodhgaya.
By Phub Dorji Wang at February 22, 2019
Email ThisBlogThis!Share to TwitterShare to FacebookShare to Pinterest
Newer Post Older Post Home