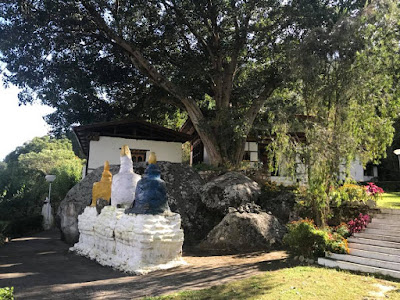 It is always heat warming to visit the place where Drubthob Nagi Rinchen liberated his mother who was serving a toughest hell sentence inside a big rock. Had he not liberated her, there is literally no way for her to come out from such imposed hell. 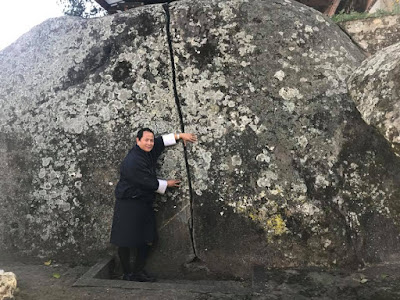 It is assumed that there are 33 stages of god (Sumchu Tsasum). One year of first stage is considered one day of the second stage. One year of the second stage is one day of  the 3 stages and so on and so forth. So when 33-stage god marks one year a vulture appears and touches the stone with its feathers once. Only through the wear and tear of stone by feather one would able to come out from such hell. Means literally there is no chance to see the light and one has to suffer continuously.

I am very happy to visit this place and at the monastery located nearby I have offered butter lamps and prayers to Drubthob Ngi Rinchen. There are two places that were used by Drubthob Ngi Rinchen when he was in Punakha. I have visited both the places, a stone where he liberated his mother and the cave on the other side of the river where he meditated every night. 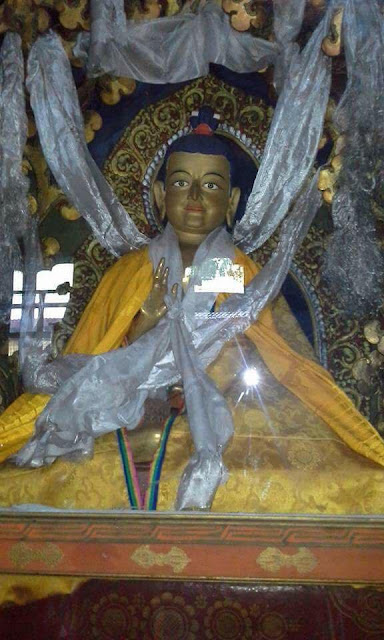 According to legend, Drubthob Nagi Rinchen (Vanaratna, 1384-1468) a Bengali Pandita and Mahasiddha, reportedly the “last great Indian Pandita to visit Tibet” liberated his mother from the huge black rock in Punakha.

It is believed that he came to Punakha after learning through his clairvoyance power that his mother was reborn as a frog inside the rock, (symbolizing hell) due to her dreadful sins.

In search of the rock Drubthob Nagi Rinchen finally reached Punakha after tedious journey. Unfortunately he found out that the land on which the rock stood belonged to an old woman called Aum Ritsa Chum.

Since the rock belonged to someone, he couldn't do what he liked. So he thought that he must buy the big rock to liberate his mother, the very mission that he came to Punakha.

Drubthob than approached the old woman and asked for the rock who demanded that he work for her for three long years to get the same. Drubthob left with no other alternative than to accept the offer.

So he worked for her doing all types of jobs like ploughing, digging, paddy cultivation, weeding, looking after cattle, fetching water, bringing firewood and even carried cattle manure. Manure carrying generally is considered to be sinful if carried by a man (that is the belief, I can’t elaborate). Carrying of manure still is considered a woman’s work in the villages. No worry, I too carried lots of manure in my village long time back. I don't differentiate jobs.

During Drubthob's service to the old woman he followed certain timings, during day, he engaged in the woman's work and in the evening he meditated in a cave across the Mochhu. It is believed that Drubthob crosses the Mochu River without even touching his feet on the water. 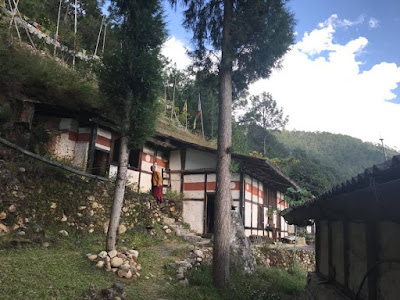 Finally from the remains of the frog he molded Tsha Tsha (small stupa) and offered them as dzung in Risugem chorten which he had constructed at the same location.

In 1991 a temple was constructed near the sacred rock by Yab Ugyen Dorji and Yum Thuji Zam and offered to Punakha Dratshang. Today, the temple is commonly called Dho Jhaga Lam Lhakhang.

To celebrate his happiness he had built Punakha Dzongchung. 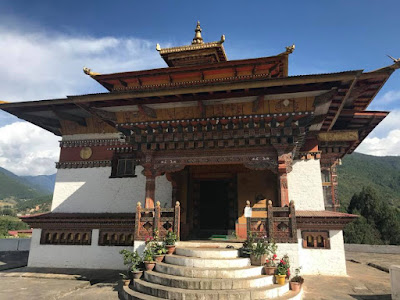 According to Baylaga Lam Kuenzang, it is of great profound to visit the very site where Drubthob liberated his mother. Only few Bodhisattvas in the history of mankind could able to repay their mother. They are Lord Buddha, Mongallana, Lama Drukpa Kuenley and Drubthob Nagi Rinchen.

So it is impossible to repay our mother's kindness in this life. So it is a great learning from these facts that we treat our mother well when they are around.


Who is Drubthob Nagi Rinchen? 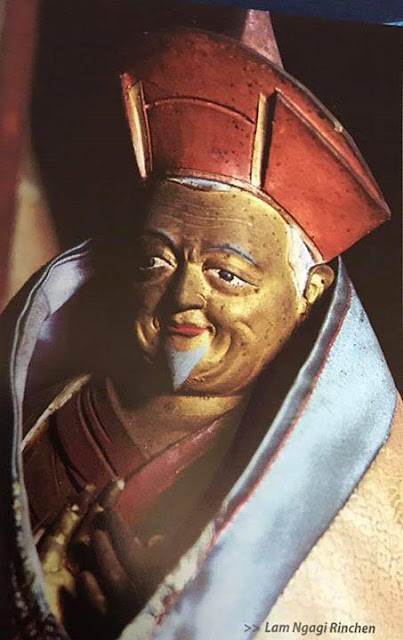 Drubthob Nagi Rinchen (Vanaratna, 1384-1468) a Bengali Pandita and Mahasiddha was born a prince in Sadnagara, near present-day Chittagong district of Bangladesh.

At age 8, he received novice ordination from Buddhaghosha and Sujataratna. He took up his studies and perfected them very quickly.

At age 20 he received full ordination from the same two masters, and went to Sri Lanka for six years, where he spent most of his time meditating in seclusion.

Upon his return to India, he was greatly praised by the famous scholar Naraditya.

Vanaratna eventually beheld a vision of Avalokiteśvara, who advised him to go to Tibet.
Vanaratna visited Tibet in 1426, 1433 and 1453 and spread the Kālacakra lineage and instructions of Paṇḍita Vibhūti-candra there, especially the Sadaṅga-yoga according to Anupamarakṣita, and many other teachings.

He also assisted in the translation of many texts and treatises. Such famous Tibetan masters as Gö Lotsawa Shönnu Pal (1392-1481) and Thrimkang Lotsawa Sönam Gyatso (1424-1482) were his close students.

He also spent time in Bhutan, where even nowadays there is a temple, near Paro, with a sacred statue of his and a rock that bears his name in old Bengali script. Vanaratna spent his final years in the Gopicandra Vihara in Patan/Kathmandu, now known as Pinthu Bahal, and passed away there.

If you are in Punakha, please do visit this sacred site. o effort is required. It is just nearby the road.