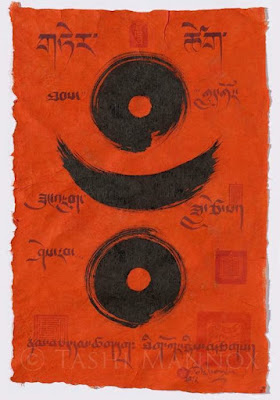 The Prayer, Prophecies and Namthar hidden by Guru Rinpoche and Khandro Yeshey Tshogyal has a Terma motif at the end of each sentence.

Great Tertons as per the prophecies of Guru Rinpoche along with other artifacts revealed these Terma. Prayers with such Terma motif are not an ordinary prayer. Guru Rinpoche himself composed these prayers and when recited on daily basis has immense benefits to oneself and to all sentient beings.

I now remembered when I was young my late father explained me the meaning of this Terma motif to me. I am too eager to share the same to my friends.

In the Prayer “Lue Duenma”, “Barchel Lamsel” etc you will find sentence ending with ༔ that means these are not an ordinary prayers, it is a Terma.

Prayers with sentence ending with straight slash are not Terma, they were written by great Rinpoches, Lamas, Dropthops, Khyentses etc.

According to the vision of Terton Taksham Nuden Dorje, the two circles of the Terma Motif symbolize ‘means’ ཐབས་ and ‘wisdom’ or ‘knowledge’ ཤེས་རབ་. The crescent moon between them represents their indivisible unity ཟུང་དུ་འཇུག་པ།.

The Ter-tseg used as a punctuation mark can also be written as just two ཿ circles without the crescent moon, such as in Terma manuscripts from Mindrol Ling.

The image of two small circles and a crescent moon shape ༔ is known in Tibetan as a Ter-tseg གཏེར་ཚེག་. When used as a punctuation mark at the end of a line of text or mantra, it tells us that the origin of the mantra or manuscript is a spiritual treasure called a Terma གཏེར་མ.

Guru Rinpoche and Yeshe Tsogyal has hidden these for the benefit of future generations. 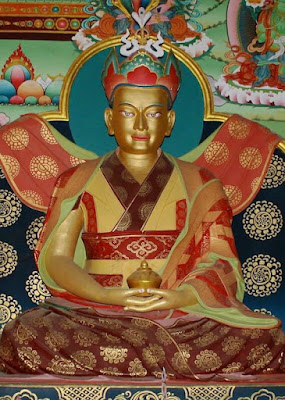 He was born in the Lhorong valley of Southeastern Tibet and, whilst being far from an academic or intellectual, authored texts of great profundity.

According to the 'Pawo Chö-jung', a Book of Buddhist History by Pawo Tsuglhag Gawa Teng'ar (otherwise known as Pawo Rinpoche), it is stated that:

'A ngakpa named Nuden Dorje will appear, who shall reveal the Térmas of Padmasambhava in Kham'.

Taksham Nuden Dorje was entrusted with this text by the protector Hu-dag Nakpo - Düd-jé 'Barwa ('Sovereign of the Black Waters - Blazing Lord of Devils' - who had been oath bound to deliver it into his hands by Padmasambhava and Yeshé Tsogyel.