Nyung Nay practice (How to attend this important religious ceremony)

In the Tantra of the Eleven-Faced Chenrezig, it says that by doing one Nyung Nay you can overcome the obscurations and wrongdoings accumulated throughout 40,000 eons of continuous samsara. 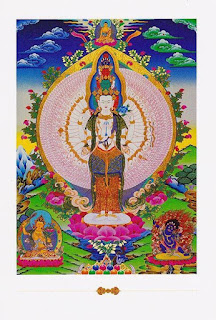 (Eleven-Faced Chenrezig)
The Nyung Nay or fasting retreat is a Vajrayana practice from the Kriya (Action) class of Tantra. It is said that engaging in a Nyung Nay retreat is equivalent to doing up to three months of other kinds of retreats. It is a powerful, quick and effective method to purify a lot of negativities and at the same time collect a vast amount of merit.

This extremely powerful purification practice of Nyung Nay was given to the nun Gelongma Palmo directly by Chenrezig as a method to cure herself of leprosy and, eventually, to attain her enlightenment. 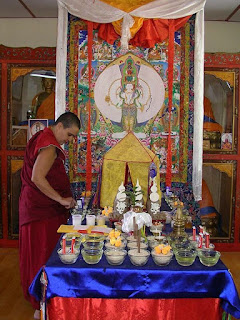 (Nyung Nay Offering)
Meditators of the past have been known to purify such diseases as leprosy through this practice. However, the principal purpose of the practice is the attainment of supreme enlightenment for the benefit of all living beings.

If while doing a  Nyung Nay retreat you become ill, this purifies the karma that would otherwise cause you to be reborn in the hell realm (provided that you still keep the Nyung Nay vows).

If you become torpid, sleepy or depressed but still continue the retreat, this purifies the karma that would otherwise cause you to be reborn in the animal realm.

If you suffer from hunger or thirst, you purify the karma that would otherwise cause you to be reborn as a hungry ghost. 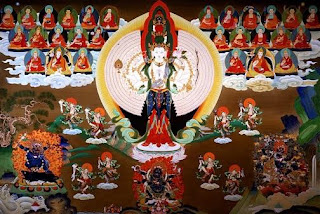 A Nyung Nay consists of seven sessions spread over two days and a morning and requires taking the Eight Mahayana precepts for the two days. In each session we practise the sadhana (a text called “The Means of Achievement of the Eleven-Faced Great Compassionate One”) of Avalokiteshvara, the Buddha of compassion.

The sadhana involves generating the altruistic aspiration to attain enlightenment for the sake of all sentient beings, visualization of the deity, reciting prayers and mantras, and performing prostrations. Each session takes between two to three hours.

Participants arrive at the retreat center on the evening before the first day. On the first day of the Nyung Nay, we take the Eight Mahayana Precepts: avoidance of killing, stealing, sexual activity, telling lies, taking intoxicants, eating more than one meal, singing, wearing ornaments, etc. and using high beds or seats. Three sessions of the sadhana are practiced on the first day.

On the second day, we take the Eight Mahayana Precepts, as above, with the additional vows of not eating, drinking or speaking until sunrise the next day.

Three sessions of the sadhana are practiced on this day. Although we vow to keep silence, we continue to recite the prayers and mantras of the sadhana. If communication between participants is necessary, it must be done through writing notes.

The second day is the most difficult part of the retreat. We experience hunger, thirst, tiredness and aches and pains from doing prostrations. Some people feel ill from the fasting. However, if we understand the purpose of the practice, we will not mind the discomfort.

Refraining from eating and drinking or even swallowing saliva is a way of offering food, drink and saliva to other living beings. By experiencing hardships in our Dharma practice, we are able to purify a great deal of our negative karma accumulated over countless previous lives.

We can also build up positive habits and states of mind to counteract the negative ones. Although the Buddha advised the “middle way” - not too soft, not too tough - the discomfort experienced during a Nyung Nay is bearable and not too tough. Also, it helps us have better understanding of the suffering experienced by animals and hungry ghosts (and some humans!), and thus develop greater compassion for sentient beings, and greater renunciation of samsara.

We do the seventh and last session of the Nyung Nay in the early morning of the third day. At the sunrise, the fast is broken with blessed water.

The fast that we are to abide in is to abstain from physical, verbal, and mental destructive actions and to abstain from ignorant, angry, and clinging attitudes. To help in the process, the eight Mahayana precepts are taken for two days.

Dear friends, at lest sponsor and attend one Nyung Nay in your lifetime.

Even if you cannot do the practice yourself, there is immense benefit for sponsoring a Nyung Nay retreat or facilitating the practice for others. This includes such things as providing the food on the first day or serving the people who are doing it. 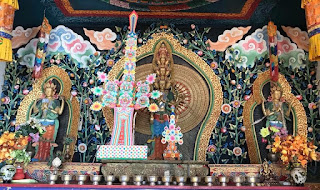 For example, it is said that to serve or offer food to a Nyung Nay participant is the same merit as offering food to an 8th-level bodhisattva. In addition, it is said that by offering food to Nyung Nay participants even once for a day, the result will be that in all your future lives you will never suffer from famine, and for 80,000 eons you will never suffer from hunger or thirst.

All obstacles will be pacified, you will be assisted by devas and your body, speech and mind will be free of defect and everything you wish will occur.

Your longevity, merit and prosperity will increase, and you will become a disciple of all the present and future Buddhas.